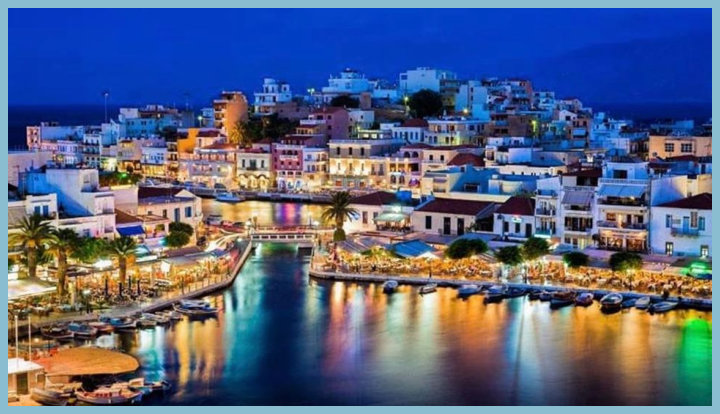 Agios Nikolaos is the capital of the county of Lasithi and is located on the North coastal line of Crete in a distance 60 km east of Heraklion, 64 km west of Siteia and 28 km north of Ierapetra.

The economy of the region is based on the growth of the olive tree, on the unweighted livestock and mainly of tourism.

It is an earthly paradise as it stands out for the unique beauty that the large lake gives it in the center of the town which unites with its port, the little bays, the sandy beaches, the tourist shops and the presentable hotels along the coastal line of the area.

Part of the beauty is captured by the small villages which hug the town and remind with their presence the tradition and the simplicity of the rurallife. 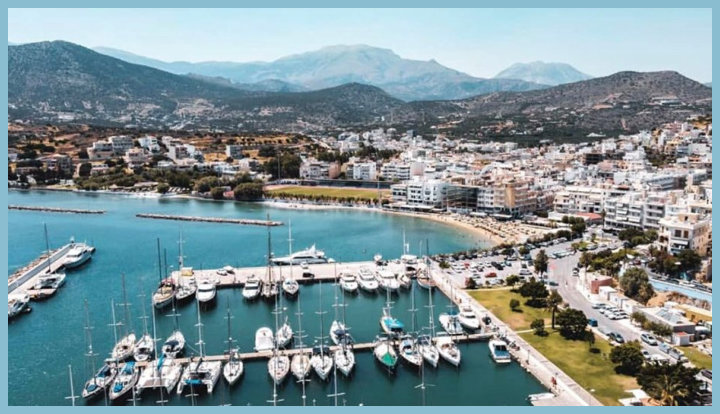 Since always Agios Nikolaos won the monopoly of tourism interest while besides its natural beauty, during  summer months there is intense night life, a variety of tourist activities (sea and mountainous sports) covering every need, while the routes with the ferries from the town’s port to the rocky islets and to the beaches of Elounda (Spinaloga) leave the best memories to each visitor.

For the last 30 years, the Higher School of Tourism Professions of Crete has been based in the area, attracting a large number of students from all over Greece. 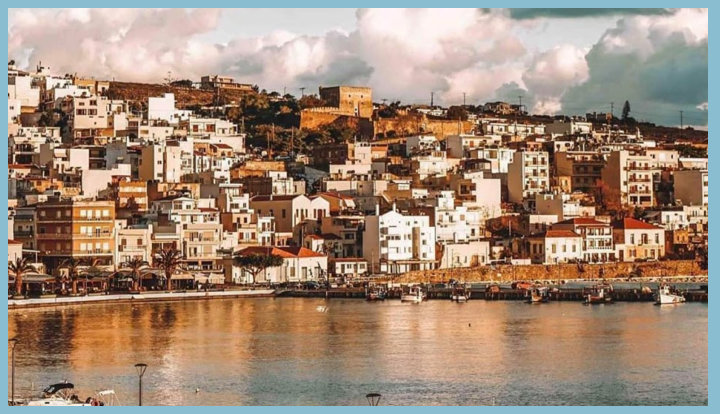 Siteia is a coastal town on the east of Crete in Lasithi county. It is located on the north eastern part of the county, 70 km east of Agios Nikolaos and 130 km from Heraklion (port center and airport in Crete), while it is the base of the homonymous municipality. It is the homeland of the poet “Erotokritos” VitsentsosKornaros.

In the town of Siteia, someone can visit its museums which bring the past to life such as the archeological museum, the folklore museum and the museum- exhibit with local products (most popular products are the olive oil “Siteia”, the “Cretan local wine” of Siteia, and the TsikoudiaVarvaki). Also going for a walk on the coastal pavement of the town and the port, you may end up at the castle, or Kazarma (Casa di arma), which brings back to life the war past.

Siteia is a tourist resort, while the beaches of the town and in the surrounding areas, they enchant and calm every visitor. Main tourist destinations are the beach in town, the beach of Vai( this beach has palm trees, 24 km from the town of Siteia), the beach of Xirokampos ( 45 km from Siteia). 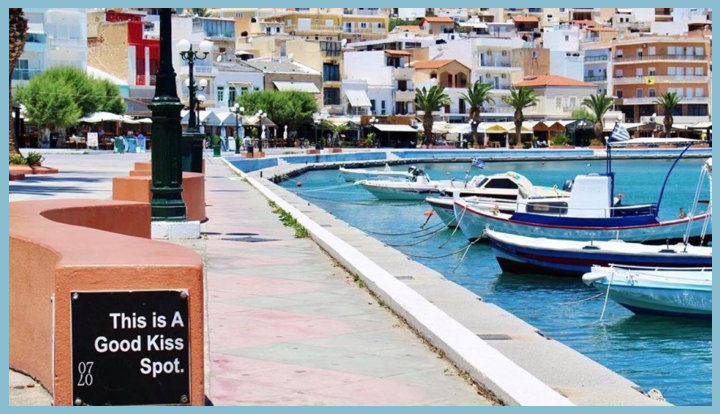 The access to the town is made from two main roads. The south one leads to Ierapetra crossing the county of Siteia from the Libean to the Cretan Sea and the north road connects Siteia with the capital of the county, Agios Nikolaos. With the rest of Greece, Siteia connects by air and ferry. The port of Siteia mainly serves small fishing boats and sailboats, but is-potentially- in the position to serve larger passenger ships. Siteia is connected with Piraeus by ferry with the passenger ship “Preveli” of ANEK LINES, while Siteia is connected with islands of the Cyclades and the Dodekanisa. The airport of Siteia can accommodate small and medium sized airplanes.Frequent flights take place from and to Alexandroupoli, Athens, Rhodes, Karpathos, Kasos, Aktio and Heraklion. Also, the airport is in the position to accommodate charter flights and private airplanes. 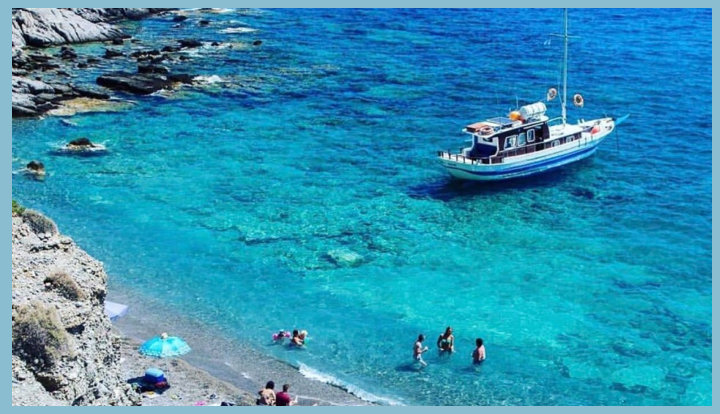 Today the town is the one of the most productive areas in Greece, it is the only civil center in Southern Crete, while it is the main economic and commercial center of the prefecture of Lasithi, as it is an important commercial center for the export of agricultural products to Europe. The town of Ierapetraprovides health care, as the General Hospital of Ierapetra is located in the town center, whereas in the entrance of the town the Artificial Kidney is located which is equipped with state-of-the-art equipment and staffed with specialized medical and nursing staff. 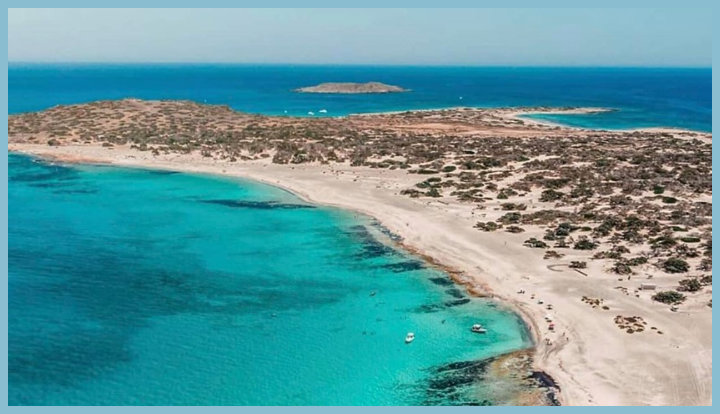 In recent years it is one of the most in demand destinations in Crete with a large impact on both Greeks from all over Greece but also from Russians, Italians, French and Germans, who tend to invest in both seaside and mountainous places.

Many traditional villages belong to the area of Ierapetra , which skillfully decorate the town and tend to focus on tradition, hospitality but also the beauty of simplicity and peaceful life.

The region of Ierapetra is known for its various activities which someone can do in nature, as the mountainous routes, the canyons, the bicycle lanes in the town center and the big beaches are ideal parts for every activity.

Ierapetra has some of the most beautiful and clean beaches in Crete. For this reason, it has been awarded from theEuropean Union for Coastal Conservation (EUCC), with the International Award of High-Quality Coasts. This means that, Ierapetra with international acknowledgement, is included on the list with the 50 most attractive regions in Southern Europe.

An important gem of the region is the island Chryssi (or else Donkey island) which is located 9 nautical miles south of Ierapetra. Due to the infinite natural beauty and the preserved ecosystem, it has joined the European program for the protection of natural beauty landscapes NATURA 2000. It is an islet well known for its tropical waters, which exhaust the whole palette of blue and green. Famous also for its golden beaches, owing to getting its name Chryssi, but also from the protective forest, with the big cedars aged over 200 years old. It is an earthly tropical paradise, which is the Southernmost natural park of Europe and that is why fairly, it is known as “the Diamond Stone of the Mediterranian”.