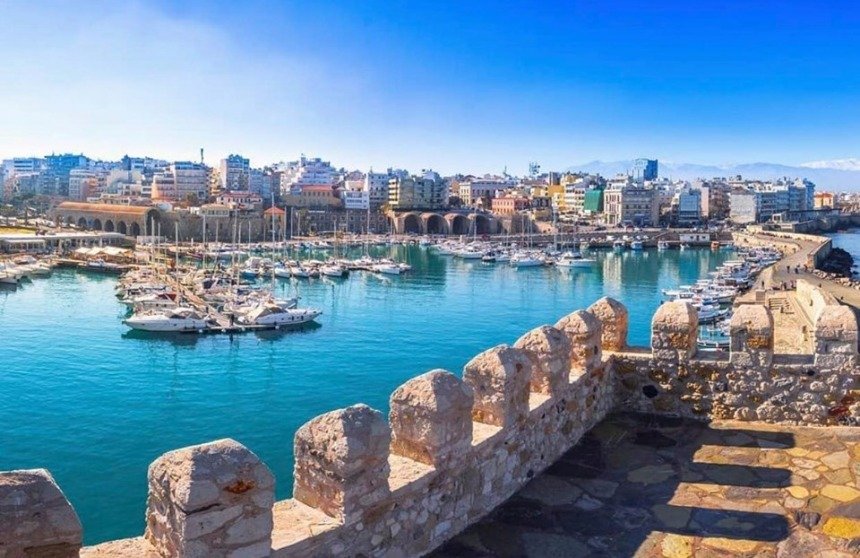 Heraklion is the largest city on Crete (120 km2) and the capital of the county of Heraklion and is located on the North part of Crete, east of the town of Rethymno in a distance of 80 km and west of the town of Agios Nikolaos in a distance of 62 km. Heraklion has one of the largest in traffic airports in Greece and also a port with dense coastal transport especially with Piraeus and other islands.

The economy of the city is based on commerce, tourism and agriculture, while it has the biggest industrial area in Crete, 4 km south east from the center. It has two of the biggest hospitals in Crete (University Hospital and Venizeleio Hospital) which serve the whole island, while there are many Private Medical Centers. Heraklion is followed by a great historical past that is revived in every square of the city, as there are still the Venetian Walls, Temples, the Castle at the port (Koule) but also the whole Mycenaean Civilization, while at many parts of the city there are historical monuments and museums (Ancient-Historical civilization, Natural History).

Heraklion is the cultural center of Crete and that it is why it has a rich Calendar program of activities of all interests, which take place from the city center to areas close it.

Heraklion has many traditional villages which are located in nature of infinite beauty and are famous for their products, their hospitality but also for the peaceful, near nature lives. Also, in a distance less than 30 km east of the city, there are coastal tourist areas (Gouves, Hersonissos, Malia), which are famous for their special beaches, the intense night life and the high percentage of youth tourism from all over the world. From the west side of Heraklion in a distance less than 20 km there are also coastal areas ( Palaiokastro, Lygaria, AgiaPelagia, Mononaftis) with a big tourist interest, which stand out for their unique sea bays, the blue-green waters and the golden sandy beaches.